The European Space Agency (ESA) has awarded a contract to DAPCOM Data Services for the study and implementation of a new algorithm for the Gaia data processing.

Gaia is ESA’s groundbreaking space astrometry mission that has revolutionised Astronomy, already with its second Data Release in April 2018, and will continue data collection until, at least, 2022. To transform on-board measurements into final products usable by scientists, Gaia relies on the Data Processing and Analysis Consortium (DPAC), which is composed of several Coordination Units (designing and implementing algorithms, mostly using the Java programming language) and Data Processing Centres (running the software on high-performance computing platforms).

The Intermediate Data Updating (IDU), running in the MareNostrum supercomputer at the Data Processing Center of Barcelona (DPCB), is one of the most demanding systems in DPAC. It has to process all of the raw data accumulated throughout the mission. In this process, IDU determines the image parameters for the many billions of tiny images received from the satellite, and it also links the billions of measurements (or “transits”) with their corresponding astrophysical source.

For the preparation of the fourth Gaia data release, IDU will go one step beyond, providing outputs not only for the sources already detected onboard Gaia, but also looking for new sources close to them. In other words, IDU will look for “close source pairs” – astrophysical objects very close to each other in the line of sight, which were previously identified as just one single source due to limitations in the on-board image processing capabilities.

Example of a close source pair, with two real astrophysical sources (around 10mag) separated by about 400 milliarcseconds.

A first processing step in IDU will detect and characterize the images of these close source pairs – just one measurement at a time. Afterwards, all these measurements (billions of them) must be cross-matched with each other, including the new information on close source pairs, resolving the complex scenes without ambiguity. This multi-measurement cross-matching of close source pairs is the task that ESA has entrusted to DAPCOM. In practice, the final outcome of this contract will be an increase in the angular resolution of the Gaia catalogue. The contract, funded by ESA, started in October 2020 and will last for ten months. 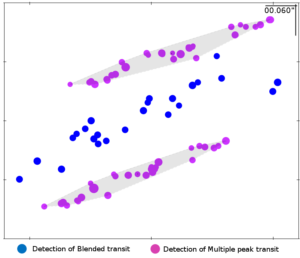 Example of a multi-measurement scene to be resolved for a close source pair. In most of the transits, Gaia detected one single object (allocating one single measurement for both sources), whereas IDU is often able to resolve, on ground, both sources in the same single image (in purple). In some of the transits, the two sources cannot be disentangled due to different resolution, pixel scale or scan directions, leading to blended source profiles (in blue). Here, both sources have a proper motion of about 160 milliarcseconds per year. More complex scenes must also be treated, for example with sources having very different motions.

This activity is carried out under a programme of, and funded by, the European Space Agency.